Couple of problems have emerged.

Got the old thing on the ramps this afternoon to fit the oem cats back on in preparation for the mot, and low and behold wires hanging down! The wiring to one of the front Lambdas had somehow come apart, and what is left of one part of the plug was jammed between the exhaust and the engine, so that bit is toast, no worry as I have 3 sets of lambdas in the garage, but the plug on the other end, ie the wiring loom to the engine has been dragging on the road and is also toast, does anybody know if you can buy the plug end separately and I can then splice it into the loom? also while getting the cats off, I broke the bobbin mount for the exhaust at the rear of the cats, don't suppose anyone has one lying around? have done a search online, but it is quite big, 8mm stud, 37mm length, 40mm width.

Sounds like the youngsters at work, it somehow came apart, and, oh yeah I also broke this! Sorry I'm sure the lambda could easily be spliced, maybe buy a second hand one from breaker including the bit of loom. Try Soprano Stu, he has a lot of 3200 bits n bobs.

You can get plugs for the lambdas, is it square or round or 3 barrels?

You’ll need a proper tool for crimping the terminals. I can’t stand splicing stuff in. 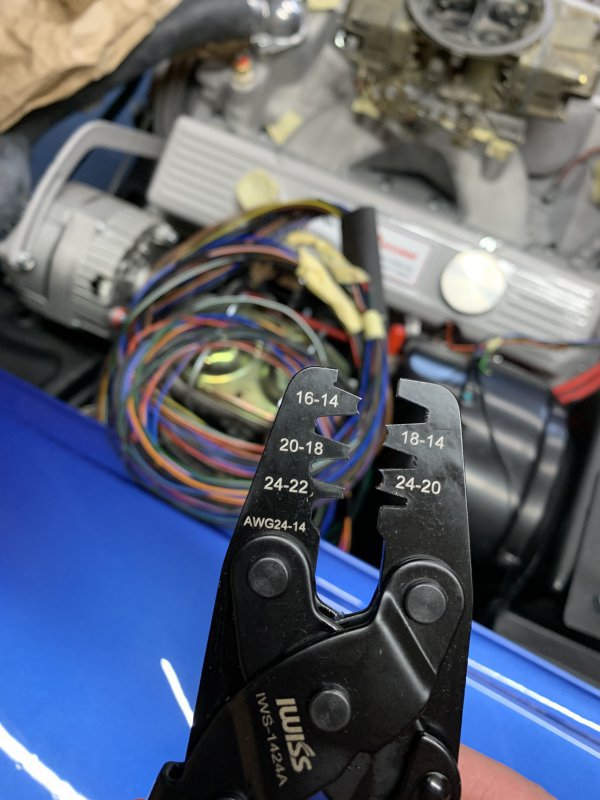 Here's what it should look like and what it does,

hashluck said:
I am sure I have some Lambdas somewhere if you get stuck
Click to expand...

Thanks John, Lambdas I have in plenty, the problem is the car end, see pics. Either the plug came apart and flailed about and shredded the fan belt, or the other way round, but the belt is only a year old.

Are you sure those two plugs go together? They both have female terminals.

Oneball said:
Are you sure those two plugs go together? They both have female terminals.
Click to expand...

Oneball said:
Are you sure those two plugs go together? They both have female terminals.
Click to expand...

The melted one in the 3rd photo doesn’t go into the one in the first two.

can’t help you with the 6 way it wasn’t what I was expecting, but there’s a part number on it that I can’t quite read.

No, the melted one used to look like the one in the other 2 pictures

Just a bit of an update on this, Short of buying a complete engine wiring loom there was no luck in finding the Plug for the lambda, so on the advice of Emblem I have just used a generic waterproof male and female connector block have rewired that particular sensor. Emblem also suggested that the cause of the fan belt failure was likely to be the air con compressor failing, So a new one has been purchased, and reading this guide https://www.sportsmaserati.com/index.php?threads/gransport-replacing-air-conditioning-compressor.28575/ I thought, yeah piece of p, oh no! this will not work on cars with the 4 bolt manifold !! Bo*ks. Now the fan belt did not break completely, it 'de laminated' if you like, it was still in a continuous loop, but the outer had come away from the inner so to speak, so I have removed it today, and surprise surprise, the air con compressor turns freely, as does everything else, there are no signs of any damage to the inside of the belt, surely if the Compressor had seized it would have burnt a mark on the belt? What are the collectives thoughts? At the moment I am thinking I will just put a new belt on so that I can attend Haynes next week, as it is only a 15 mile drive from me.

My compressor sized and you could not start the car as the Aux belt would not turn.

Personally I'd go with that and make sure my AA membership was up to date. But what else goes on the same belt?

CatmanV2 said:
Personally I'd go with that and make sure my AA membership was up to date. But what else goes on the same belt?

This ^^^^. Plus, when you’ve got your belt on then observe the pulley when the clutch is engaged. It will probably be fine so send it.

It will spin until clutch engages. I had this, what's that smell of burning rubber when putting on the air con? oh that will be the belt then lol.

So if I run it with air con on, and it blows cold and no sign of belt slipping then all would seem to be ok ? Just got it off the ramps, have run it for 10 minutes on the drive, seems OK so far, will go for a local blast this afternoon and see what happens