Wishing you good luck for putting this part of the job to rest.

Best of luck and I hope the gods of mechanics are smiling on you.

First I had to tweak the new release bearing after doing a test assembly on the bench. There was a notch on the new one limiting how far the retainer spring could be closed, which had to be removed otherwise I couldn't easily fit the bearing in the pressure plate. Also the retainer didn't properly sit inside the pressure plate, after further inspection I realized that the groove inside the bearing also slightly differs. Looked careful if it's not a wear, but I saw machining mark, so after slightly chamfering the edge with a dremel, the bearing fitted fine with a slight play. 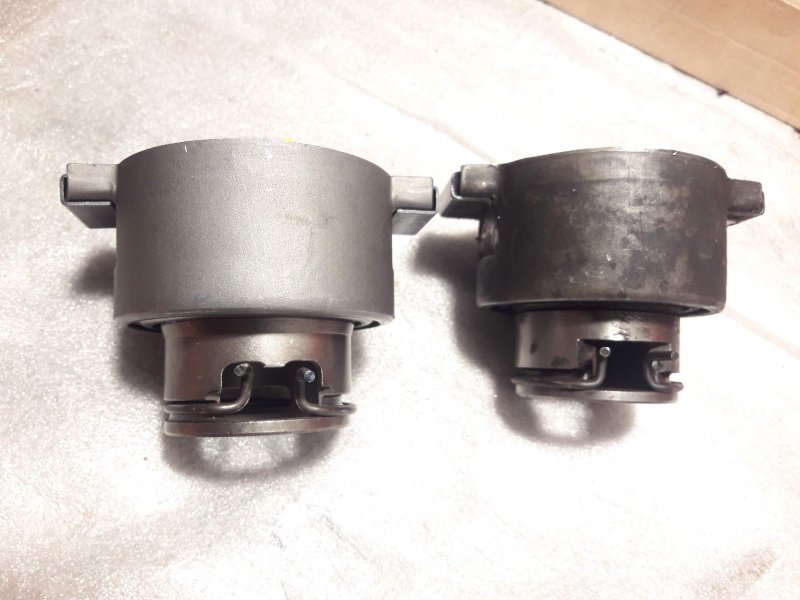 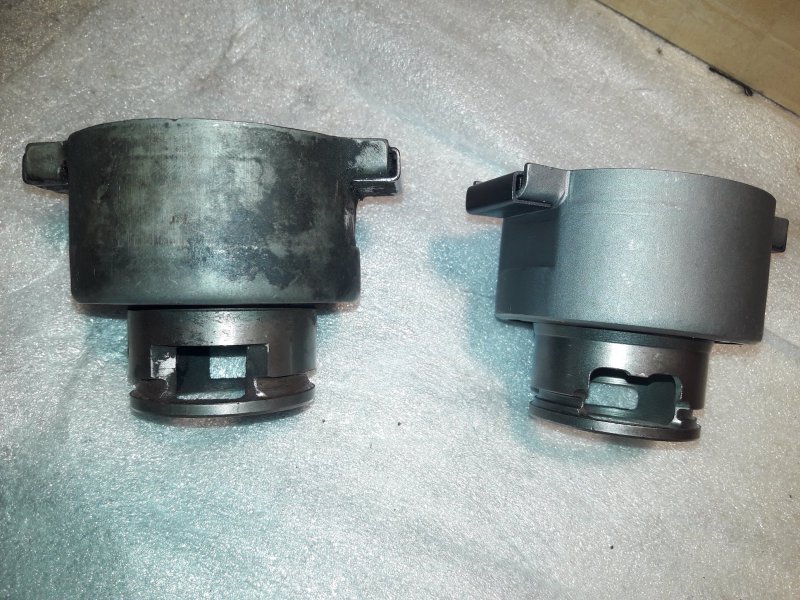 My original disk a thickness of 7.5mm. The manual calls for a replacement below 8.5mm, possibly to avoid the breakage of the flimsy ears of the release bearing. During relining we went for 9mm. CO.ME disk had 8.5 but after comparing the two devices the CO.ME one sits closer to the surface and I think that's another reason why it won't disengage on the same fork travel as the Sachs. 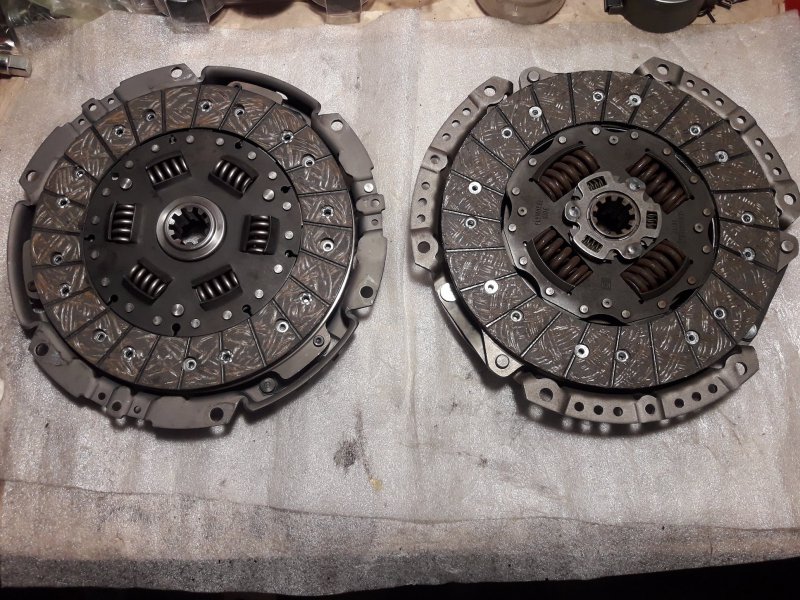 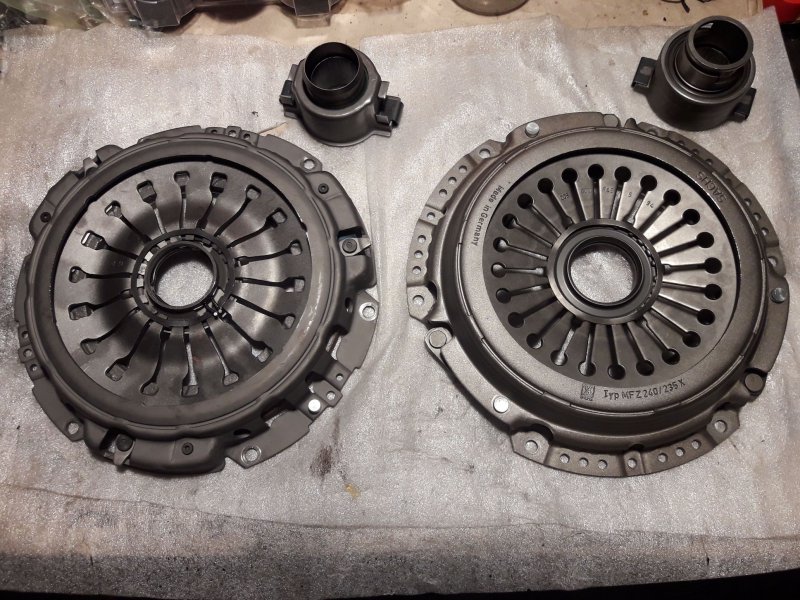 When removing the gearbox besides of removing the center exhaust section the steering rack also needs to be removed. Instead of fighting with hard hard lines and he low pressure hose, as I did, it's better to just pull it down and push aside. This will save a lot of time and cursing. Also as stated in the workshop manual loosening the engine mount bolt and inclining the engine it not enough. Below the subframe will be in the way of the bell housing, above the chassis. So i had to drop the back of the subframe by 1-1.5cm then the gearbox just barely but come out. 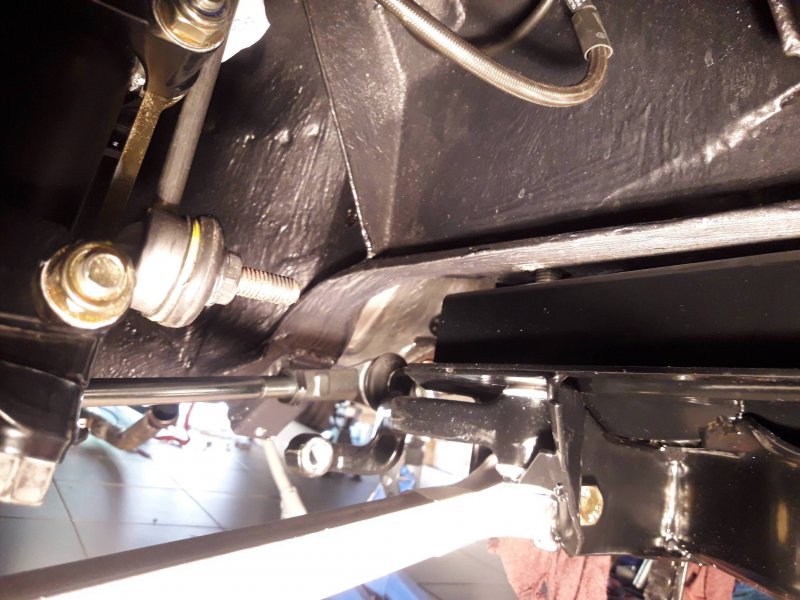 Original set then went in 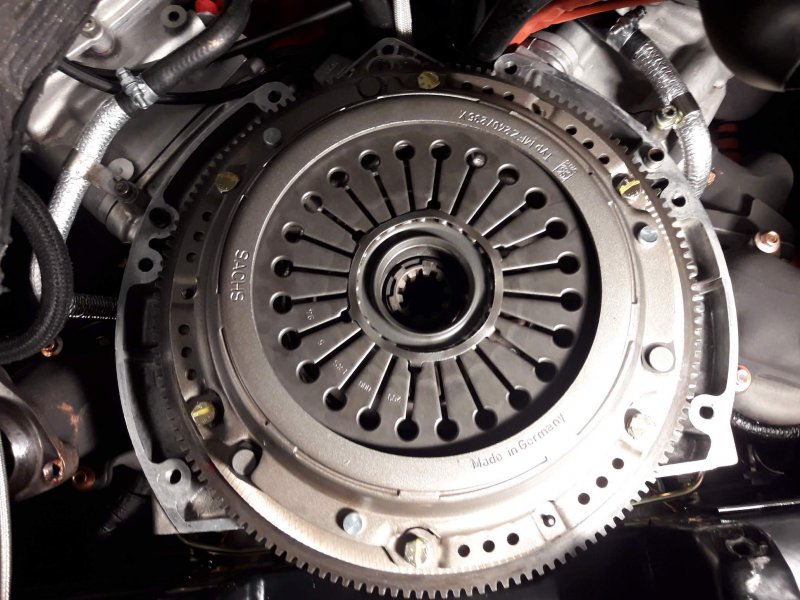 After putting back the gearbox (it's heavy, especially while lying and trying to lift it back up on the trolley jack) I bled the clutch lines and checked if I can turn the disk by hand when pressing on the pedal to make sure the clutch works properly before continuing. The hardest part was putting back the starter, which is definitely not a single person task. I had to remove the intake manifold in the end so the whole replacement took much longer than planned.

Before putting back everything I wanted to double check everything one more time so started up the engine without the exhaust to test shifting. Probably out of excitement I didn't realize on the first start how loud it is without the exhaust. I think that's why I didn't hear the rattle of the clutch back then. But this time instead I faced with a lot of oily water coming out of the turbos. It was nearly 10pm after working two full days non stop under the car. Instead of setting the whole thing on fire, closed the door and tried to forget about it for at least week. 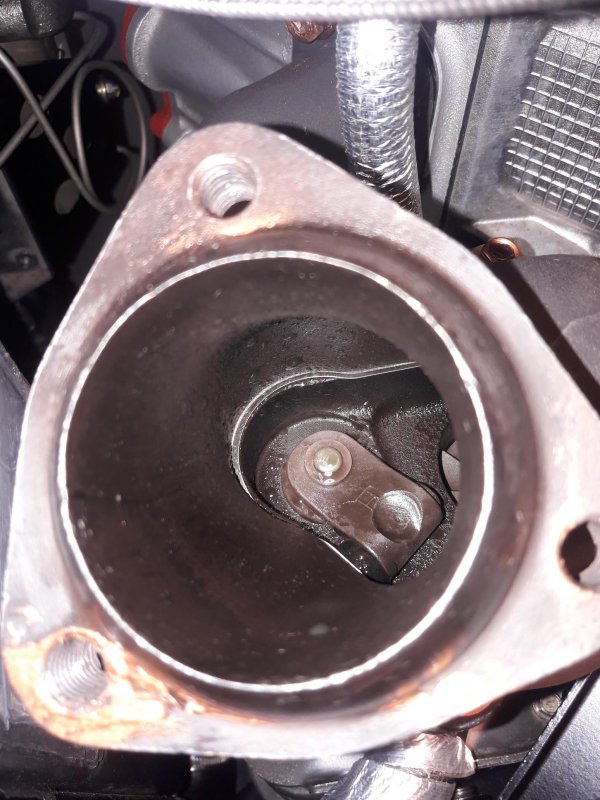 When I was trying to inspect why the initial clutch set doesn't work I did let the car heat up to operation temperature. After this I a small water puddle on the floor below the connection of the center exhaust section and the mufflers. Thought it's condensation, or something similar, and ignored it, my attention was at that clutch.

Today I started with a leak down test. I wasn't looking for exact numbers (rings didn't seat yet) but mostly bubbles in the expansion tank. I found water droplets on the spark plugs and on the top of the pistons too. During the test couldn't see bubbles, but the level of the coolant increased, slightly after testing each cylinder (only did the right bank).

I'll first try to retorque the heads. When I was installing the heads two weeks were spent between the first and second round of torquing, maybe the nuts were sticking down? Not sure, but the gods of mechanics are definitely not smiling on me. I would appreciate any insights what could be the problem.
F

"The hardest part was putting back the starter, which is definitely not a single person task. I had to remove the intake manifold in the end so the whole replacement took much longer than planned. "
Yes indeed, do not forget to attach the earth cable to one of the bolts (I did!) I don't know about the gods, but following your posts it seems to me you did your work wih the maximum of precautions and care, so it has to work. Don't you think that you should run the car for some hundredmiles to let the thing settle down before to come to conclusions
W

Unfortunately not. There is definitely an issue.

I didn't have time before, just checked with a cheap USB camera, and there is water in most of the cylinders. It's weeping on the top around the gasket, mostly on the exhaust side. I have no idea how. Gaskets were new, heads surfaced. Engine will have to come out again. One cylinder has quite some amount of coolant, really hope the rod is not bent.

Did you check there was sufficient thread on the head studs after you had them skimmed?
W

****! Misfortune seems to follow you. I know you will sort it , but what a bad luck...
wish you lots of succes!

There was enough thread. But I've tried to retighten the nuts, and after relieving the breaking torque, I had to turn the nuts with around an additional 45 degrees compared to the original position to reach the required 90Nm torque. I've checked my notes and between the 2nd and final round half a day was spent and remember that the nuts felt sticking, they just slightly moved before the wrench clicked.

I tightened the nuts one by one, will the gasket still work this way if this was the problem?

Were the heads pressure tested to ensure no cracks in the castings ?

Also since all 6 cylinders contained water (some more, some less) I think it can't be a crack, but has to be a common problem, like lack of torque.

Okay are you using a quality certified torque wrench ?
I use Snap On tools but there are other quality makes too.

Torque wrenches are from Beta and Facom, on the level of Snap On.

Could they be the wrong head gaskets?

It might sound stupid but it does happen.
The gaskets are the right way up on the block.
You'd be surprised how many can fit the wrong way.

I was thinking about these as well so asked Candini who were supplying the gaskets. Orientation is ok (sent a picture), and they never heard about a problem with this gasket so far.

I'll check if there is any change now after retorquing, I can't really think on anything else besides of all you also wrote.
A

I think the issue was the torque. I had the exact same situation recently (no Maserati - tightening instructions had been changed from one MY to the next).
I was 30 NM to low. I changed the head gasket to be safe, but it looked like new.
Tightening instructions that require torque instead of angle are always prone to failure.

Unfortunately it didn't work out. After re-tightening nuts and then filling the cylinders with air I still get bubbles when peeking in through the holes for the water temp sensors. Also checked with an endoscopic camera, and the leak is between the gasket and the heads mainly on the exhaust side. I'm pretty much out of explanations, will remove the heads to go for sure.

So far we've pulled the engine and gearbox together after removing the front section. I'll be probably alone this time, so I'm thinking about dropping them together with the subframe and just rolling out the whole assembly. Or is there any possibility to remove them with the engine in situ? The RH side seems doable, but on the LH side even if the ABS and brake master cylinder is removed, the brake booster and the head interfere with each other.

In the end I have removed the engine. Pulled again through the front section but first lowered the subframe so I didn't had to manoeuvre over the steering rack, and was able to do it alone.

One head was removed today. And it seems that the alignment dowel pins stand too proud in the block, the holes don't have enough clearance in the resurfaced heads, 0.2-0.3mm is missing. As you can see on this picture these are located on the exhaust side which would also explain why I only spotted water on that side.
You must log in or register to reply here.
Share:
Facebook Twitter Google+ Reddit Pinterest Tumblr WhatsApp Email Link