As expected the leak if coming somewhere from the gasket, but can't tell if it's from above or below


Heads will come down, will remove them both this time, as so far I've only removed one side. Will double check stud witness marks, and also try to find a place who will measure surface roughness. Also measure the thickness, but not sure if I can properly measure it because the heads are slightly angled.

The story is not over.

Took apart the new set to clean (lots of sludge) and verify everything. Found 2 bent intake valves, right at the valve head, they slightly don't close, no damage to the guides. The bigger problem is that one exhaust cam journal is very badly marked. The cap is not so bad, and the cam also looks ok. 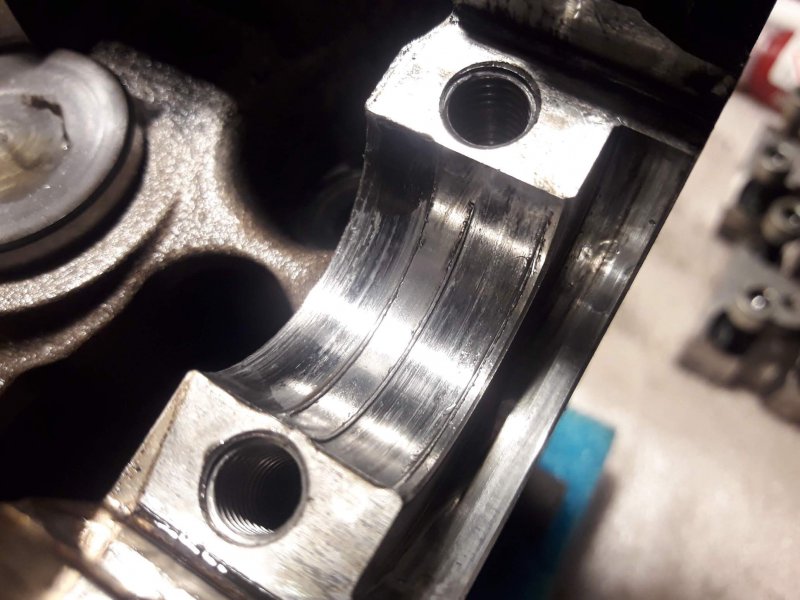 Todays took to a machine shop (a different one), but only for pressure testing at this point, told them not to touch them in any other way. As I see the only possible repair is welding up with TIG and line boring, sleeving is not possible because of the thin wall, close thread.

Regarding the leak: at this point I'm pretty sure it's the surface roughness. After disassembly the pattern is visible on the custom gaskets, which have a metal layer on the side facing the head.
Last edited: Feb 24, 2020

Glad you’re still at it.

I've already reached the point of no return. There was a time when I thought to burn the whole thing to the ground, but it's over

spacecadet said:
I've already reached the point of no return. There was a time when I thought to burn the whole thing to the ground, but it's over
Click to expand...

Admiration and full credit to you sir indeed.

My understanding is that 2.8 and 2.0 heads are interchangeable.

The 2.8 flow a bit better (bigger valves maybe?) hence they were used in the Cup cars.

spacecadet said:
Regarding the leak: at this point I'm pretty sure it's the surface roughness. After disassembly the pattern is visible on the custom gaskets, which have a metal layer on the side facing the head.
Click to expand...

The roughness should be an easy fix. Even a nice big, new and flat oilstone worked back and forth manually should solve that. Good luck anyway, you have admirable courage and drive for your project!

Thanks for the encouragements!


dt95aac said:
The 2.8 flow a bit better (bigger valves maybe?) hence they were used in the Cup cars.
Click to expand...

I heard the same initially, but both have 30mm intake, and 27.5mm exhaust valves.


azapa said:
The roughness should be an easy fix. Even a nice big, new and flat oilstone worked back and forth manually should solve that.
Click to expand...

Pressure testing revealed no problems, the journal is currently under repair. From the two sets I'll be able to build a proper pair.

Pressure testing revealed no problems, the journal is currently under repair. From the two sets I'll be able to build a proper pair.
Click to expand...

I have done that before, but the results are not that good as the emery cloth creases up and the corners round off a little. I guess you should practice first with different techniques on an old casting.

Cam bearing after repair. I'll do a very light polishing on these, because they couldn't make it more smooth with the line boring machine. 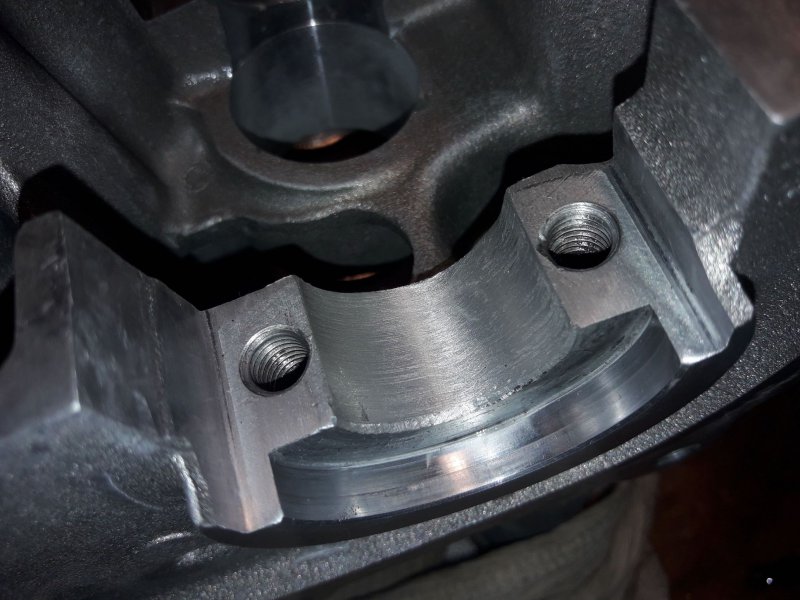 Did not have a lot of additional garage time so far, there quite a lot of work so far, but there is promising progress finally.

I really wasn't satisfied with that cam bearing repair last time. Finally found a workshop who did what I've asked for, cam clearances and bearing surface is now perfect. Also spent a lot of time measuring everything, all the clearances: cams, tappets, valve / guides. 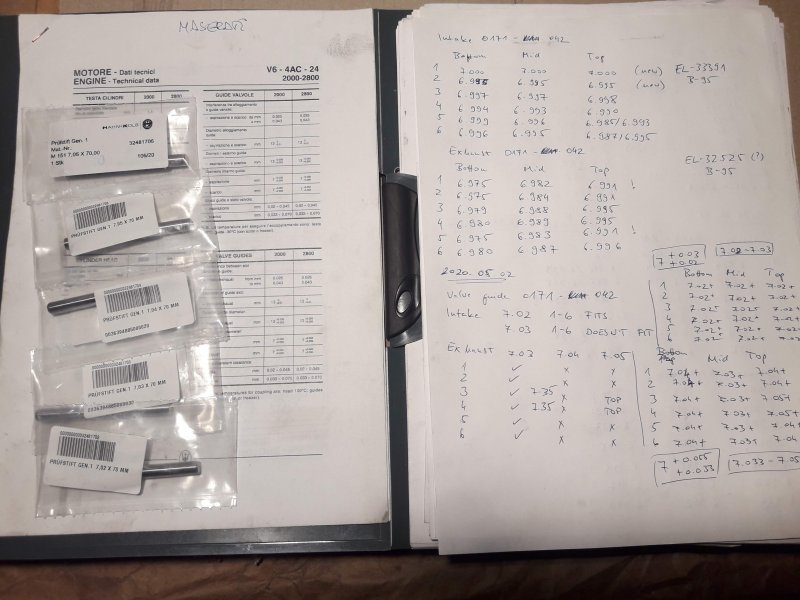 For lightly cleaning up the surfaces got a precision ground steel plate, and used emery plate on top, just as described in the workshop manual. Since I had the old heads, first practiced on those, and got better flatness than that first amateur machine shop did. Did start with 120 grit, higher values required a lot of work to remove material. Stopped at 220 which should be around 50 Ra. Those peaks and valleys were gone. Btw, I'm still planning to fix up those heads in the future, maybe put new seats and slightly bigger valves in them just for experimentation. 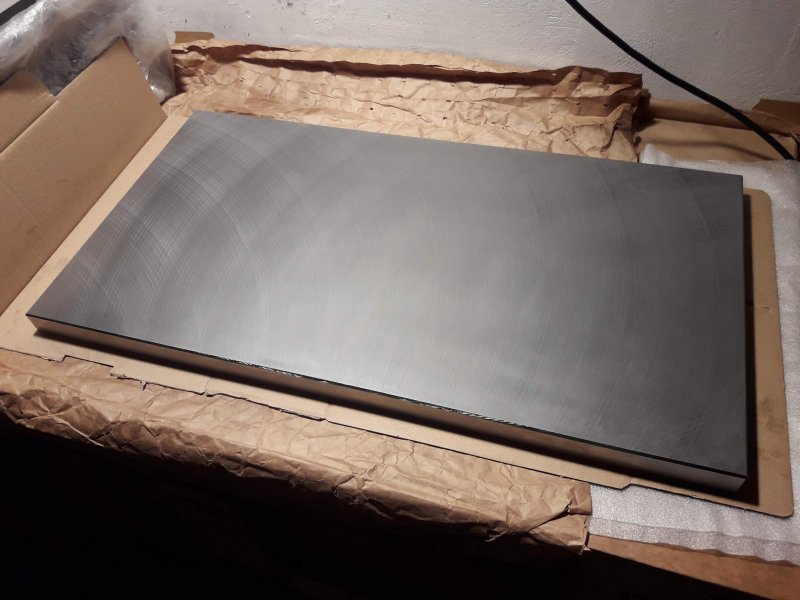 After that came the CC volume. Made one side pretty much identical (in measurement error, which is around 0.1cm3), but took nearly a day, so gave up on the other side, but all of them are in 0.5cm3 difference. 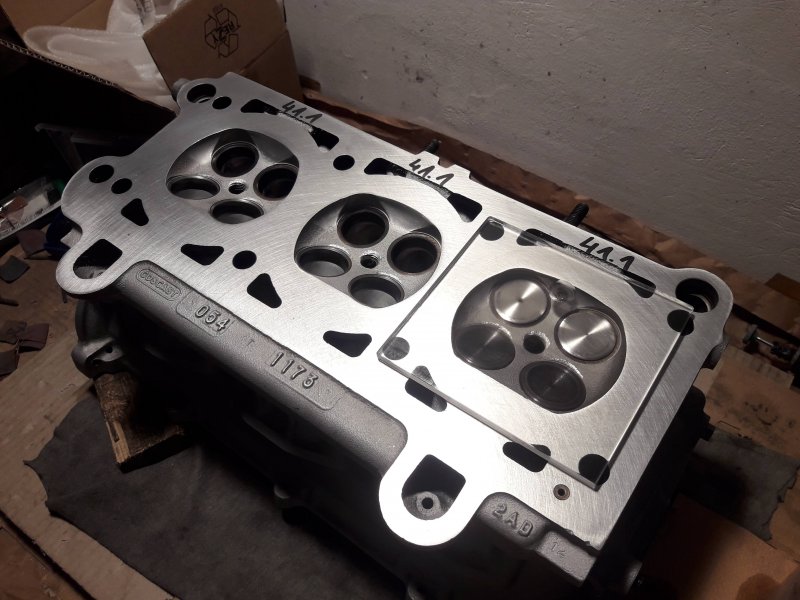 Valves reinstalled, set up the initial clearances. This should be on the loose side before assembly, as they tighten up when torquing down the heads. 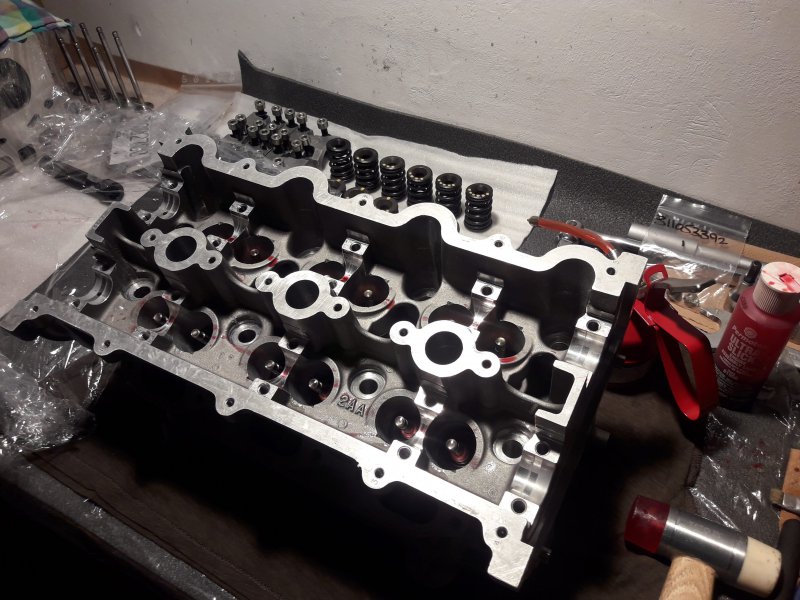 On the weekend the heads were installed, filled up the coolant passages after plugging all the hoses and did a leak down test. No bubbles! Also did pressurized the coolant side, and checked the cylinders. No leaks! On one side I've reused the custom head gasket which I've tried last time (engine wasn't started), but I wouldn't have slept well with that in, especially since the old head left those surface marks on the fire rings.

Today received a new gasket which I'm going to install in the coming days. Then what's left is setting up the timing and the engine can go back in the car.

The standard of your work is amazing, can't wait to see it finished.

As above great work

If I would be I would have already said that

New gasket is installed, just finished the final sequence of torquing the head. 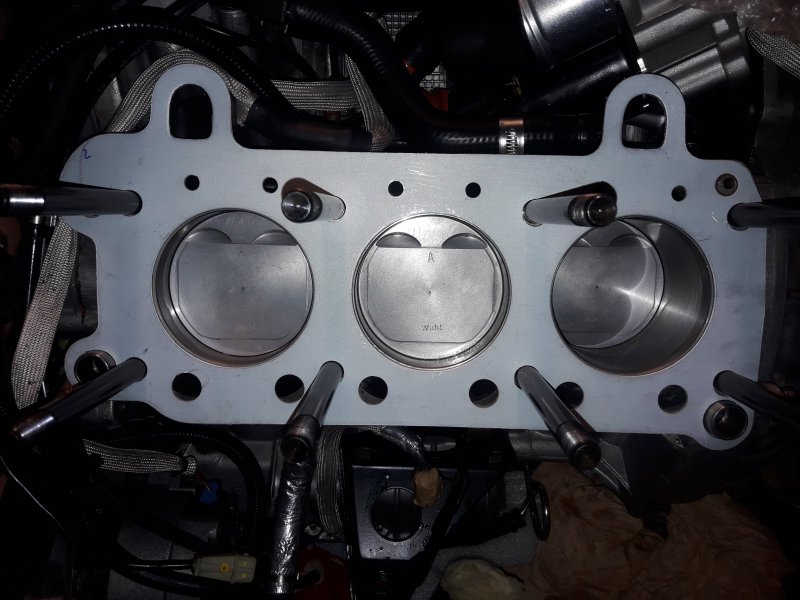 I'll be probably away for the weekend, so timing only on the next one.

This is getting ridiculous. I've rechecked all the valve clearances, aligned the cams for timing and one cam cap thread stripped and pulled out while doing the final installation. There was already work done on this one, as the cap is a custom made one, probably the thread also got some beating.

Unfortunately there is no space for installing a Heli-Coil, the hole is too close to the edge / bottom bearing. Before pulling the head again, which means a new gasket again, and the possibility that welding would distort the area leading to line boring, I want to try to repair it in situ. Seems like there is space below for a longer bolt, but not sure how to manage drilling and tapping with handheld tools without damaging existing left over threads.

I was afraid of these bolts already, not the best application for this design, where valve clearance adjustment requires repeated installation of the camshafts. Studs would have been much more suitable.