Looking at the pistons a number of things stand out to me.

1. The crown in the original pistons had valve cutouts and the new, while appearing to be the same dimensions don’t. This could mean that the piston crown height is not the same.

2. The infilled section of the piston crown does match the combustion chamber shape of the head. The intention of these steps are to create squish which aids the mixing of fuel and air to improve combustion. Without the same shape on the piston this won’t happen, and supports what he is saying. 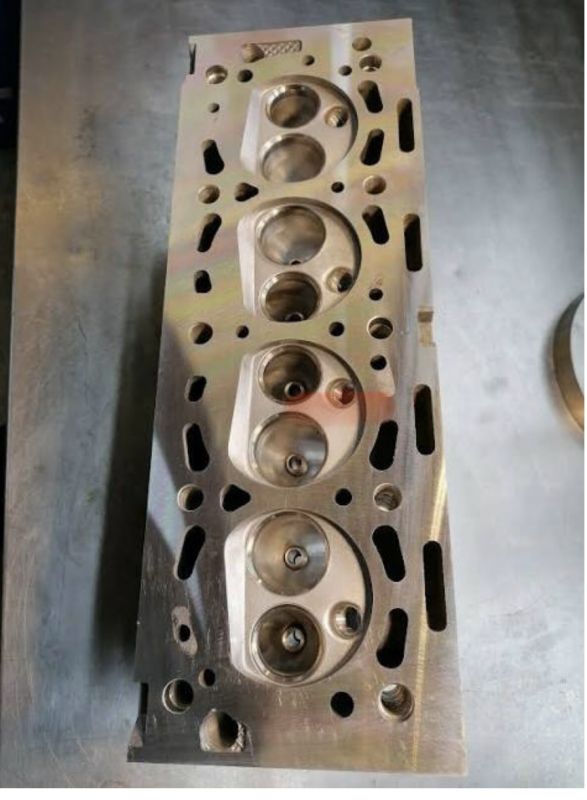 a: if there are no cutouts, this piston isn’t getting very close to the head, compared to the originals

b: I imagine the rolling road man said it was difficult to get the fueling right. As the lack of squish was messing with the mixing in the chamber

c: the engine man has used your engine to try an alternative piston, and has not got the result he wanted.

In any event, if you employed him to deliver an engine that both works and makes a certain amount of power, and made no decisions as to the parts used, then the responsibility is clearly his. How you enforce that is the next, and more difficult, question.

If you buy new pistons, you will actually make the process of determining blame more difficult. I would tell him that in your opinion, you have yet to receive an acceptable product from your original instruction, and you are willing to accept another attempt at rectification within a given timescale. If he is unwilling to do so, tell him you will take the engine elsewhere and reserve the right to claim the cost of rectification from him.

Sage advice from the Zep!

2b1ask1 said:
Sage advice from the Zep!
Click to expand...

I was thinking the same. Seems unusual

CatmanV2 said:
I was thinking the same. Seems unusual

I think I am in a lose lose situation, I have spoken with a number of engine builders today, none willing to take on someone elses work & none with an empty diary waiting for the phone to ring, so to the back of the quque. So if I do cut my losses I have nothing at all for the time & funds invested, as a new builder would want to start from scratch & as some mention probably little chance of a sucksessful legal battle, given the nature of the product.
I think we can rule out faulty Gaskets or he would be right on this. It is definitely something with the charactristics of the engine, comprssion ratio, ignition, piston shape or something. Which from our conversations he is not denying, he is just not willing to find a soultion at his expense.
The reason the pistons are my fault apparently is the origional Omega items are no longer avalible, so I did some reasearch & found that JE listed an 83.5mm Peugeot piston I advised him of this. He then (I assumed researched further the specification of these & ordered them) If he did not look up the specification & just ordered them, then surely he would have bought the issue to my attention when they arrived & opened the box, not just used them anyway?
He is saying that I told him to use them, this is not true & all got a bit heated today.
I think where we are is I will pay for the pistons, which I always said I would (that he will specify & order so 100% his responsibility this time) He won't gaurantee that this will solve the problem, but Peugeot designed it like that & 130BHP from a 1.9 8V in 1983 was quite an achievement so probably the piston design is quite crucial.
My question to him was that if it's that crucial (& mine is not the only Peugeot 205 out racing) why dosen't anyone make one & what is everyone else using? Anyway in the absence of another solution I'm happy to go for it.
He knows my thoughts on where I feel the responsibility lays (I still fail to see how it is anything to do with me) But if I dont pay for the pistons we won't move forward, I will then kick the ball down the road regarding ongoing costs untill I feel I am in a stronger position. If we are at stalemate, once I have the pistons, assuming his calculations are correct It is just a case of bolting is back together, that is probably the time to cut my loses & pick everything up.

There are many Good Peugeot specialists out there as the 205/309 are still popular cars out in the Rally and Race scene.
What's his specialty that drew you too him.
I must admit I too draw the line at what someone else has started and usually screwed up.
After 40 years I do not need the grief.

Crofty said:
So if I do cut my losses I have nothing at all for the time & funds invested
Click to expand...

I can see the grey area, but I just wouldn't. Of course, you have your motivations. I hope it pans out somehow.

philw696 said:
There are many Good Peugeot specialists out there as the 205/309 are still popular cars out in the Rally and Race scene.
What's his specialty that drew you too him.
I must admit I too draw the line at what someone else has started and usually screwed up.
After 40 years I do not need the grief.
Click to expand...

The people who built it originally Xsport racing no longer build engines, I think they now just supply parts. The guy who built it last time now builds Ford hottod engines for oval racing & couldn’t/didn’t want to do it. This guy came recommended as he built a friends championship winning hill climb car........if only knew!

One thing I learnt competing is that there are lots of bullshîtters out there and many crooks sad to say.
I really hope you get a good outcome.

philw696 said:
There are many Good Peugeot specialists out there as the 205/309 are still popular cars out in the Rally and Race scene.
What's his specialty that drew you too him.
I must admit I too draw the line at what someone else has started and usually screwed up.
After 40 years I do not need the grief.
Click to expand...

My old boss’ son used to rally a 16v 309. I remember going to Peugeot Sport in Ryton to get bits.

Modern head gaskets are very strong and will take a lot of pressure, so I call BS on that.
Wrong pistons would cause poor performance if low compression, interference probs if too high comp. If he changed the pistons, did he re-balance the engine?
My long distance guess is a poor skim on the cylinder head, warped, or wrong surface finish, or do these engine use torque to yield head bolts, and were they replaced?
If the builder won't make it right, paint his name in huge letters down both sides of the car and race it till it blows.
You must log in or register to reply here.
Share:
Facebook Twitter Google+ Reddit Pinterest Tumblr WhatsApp Email Link