I know we try to avoid politics religion etc on here, but I think this is a little bit different as it will affect us all.

Before we even know what the deal the Cabinet agreed last night, two of them have resigned, and sterling has plunged against the dollar.

Sounds like it's all going to go pear shaped.

How long before May resigns? Just after the deal gets laughed out of the commons?

I'm a staunch remainer, when she took up post I was impressed with her tenacity, whoever was in charge for this term was setup to fail... but she keeps coming back for more, I wouldn't want her job for anything!

I am surprised she has clung on for as long as she has, but in all honesty, would anyone really be able to make a better job of things?

The implications we would face were made clear before the referendum, but the slim majority seemed to believe that we could have our cake and eat it... all that is happening now is that we are crashing into the resultant pile of merde, yes the edges have been softened a bit... but we will still be neck deep in what we were told we would be...

The cards dealt were never going to be a winning hand, without the details it is hard to judge but it was obvious that you can't have your cake and eat it but the worse case is an unworkable compromise. Whatever the decision the sooner we finalise and move on the better

Won’t get through parliament, May resigns or vote of no confidence. New Remain Tory Leader, stay in EU.

dickygrace said:
Won’t get through parliament, May resigns or vote of no confidence. New Remain Tory Leader, stay in EU.
Click to expand...

That's exactly how I see it.

dickygrace said:
Won’t get through parliament, May resigns or vote of no confidence. New Remain Tory Leader, stay in EU.
Click to expand...

GeoffCapes said:
That's exactly how I see it.
Click to expand... 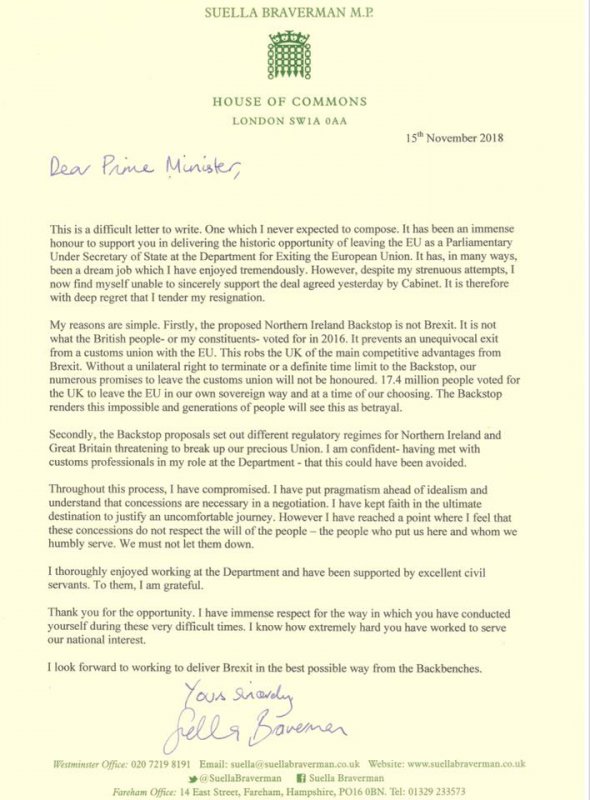 I reckon:
Parliament rejects it.
May wins a no confidence vote but the Tory party replace her with Raab anyway.
DUP pull out of the coalition causing a general election.
Labour wins general election.
Corbyn takes us into a newly reformed USSR.

Probably not the last one!

They're dropping like flies this morning, I think we are on the fifth one at time of writing.

Raab C Brexit resigning of a deal he negotiated is a bit special.

GeoffCapes said:
Just after the deal gets laughed out of the commons?
Click to expand...

It must be understood that this is not 'a deal'. This is just the Draft Withdrawal Agreement.

If this Agreement is accepted by all (big if) the UK will then face a decade or more of negotiating 'the deal'. It will be a lost generation.
Last edited: Nov 15, 2018

Makes me laugh when a Brexiteer says 'It's not the Brexit plan, we (as a nation) voted for!'

However there's been no plan from the outset, we've had a brexiteer as the Minister of Brexit David Davies, and BoJo as Foreign Minister and they couldn't deliver. So May had to do the 'best' job she could. So Damned if she does and damned if she doesn't.

my wife likes politics and has been busting my balls for several months about her Brexit opinions, I just tell her "what will be will be", I'm just worried about if Corbyn ever gets in then we'll truly be fooked

Never thought I'd say this but thank God for Gina Miller. Without Parliament this "negotiated" deal would be rubber stamped by cabinet regardless of resignations.
Instead, hopefully, it will be roundly rejected by MPs on all sides of the political & Brexit divides. What happens then - anyone's guess .....

As most have said, May had an impossible job, I actually admire her for making a fist of it, When t'other resigned the volunteers for his job were far and few,

Boris went hiding until he could sling from the sides, but he never wanted the job or to be involved in the negotiations - funny that.

Anyway, what will be will be, we'll be part of Macron's European Army, with the French as the final, final, final reserve (stretcher bearer's)

I am a leaver and want it done asap

Where is Chris Bassett when you need him?