philw696 said:
The one in Plymouth looks nice to me with good history.
Just needs the plastic face lift grill changing in my opinion.
Click to expand...

Agreed, it does look good. Making my 4200 CC I'm selling look very cheap though. I am offering it to any forum members pre-public ads or displaying for sale at Brands for the bargain price of £12.5k.......roll up roll up

philw696 said:
One of those didn't do very well on the forum track day a few years ago.
Having worked on a few in NZ not my cup of tea a 4200 is far superior.
Click to expand...

Yes ended up on its roof.....Although more driver probably than car.

A car of legends.

So a quick little update on this one.

I have had 3 forum members contact me interested in the car. The first came up late on Thursday night. Loved the car it seemed, wants to buy it but understandably as his first foray inter Maserati ownership would like to arrange an inspection. As it wasn't purchased there and then Thursday I did say it was only fair I allowed the 2nd guy who contacted me to give him the option. Unfortunately he is working through until Thursday so can't view until after then. Therefore I made both 1st & 2nd guys aware I would allow 3rd guy to have the option now. He was just going on holiday for a week from today so can't view until Sat late PM earliest.

Which is all fair enough. Just waiting to hear back from 1st guy now to see if he can arrange his inspection before/on Thursday.

I also have been liaising with a dealer on this TVR Chimaera 450 Turbo he is selling. There is an option of cash deal, or Chimaera+cash or even Chimaera+4200+cash deal.

So plenty going on and not sure which one is going to happen first! At least there is plenty of options available. Then the possibility of taking it to Brands Hatch @ Festival Italia next Sunday if nothing happens before then to see if I can do a Maverick v2 and sell a 4200 there

Well after the viewing by the first forum member last week he has gone very quiet and not responded to my messages. So I have opened the door to the 2nd forum member who is in the area and popping by tomorrow morning.

Just picked up the nice newly professionally refurbished alloy it it looks lovely. All 4 are very good now as this front left one had a few scrapes. 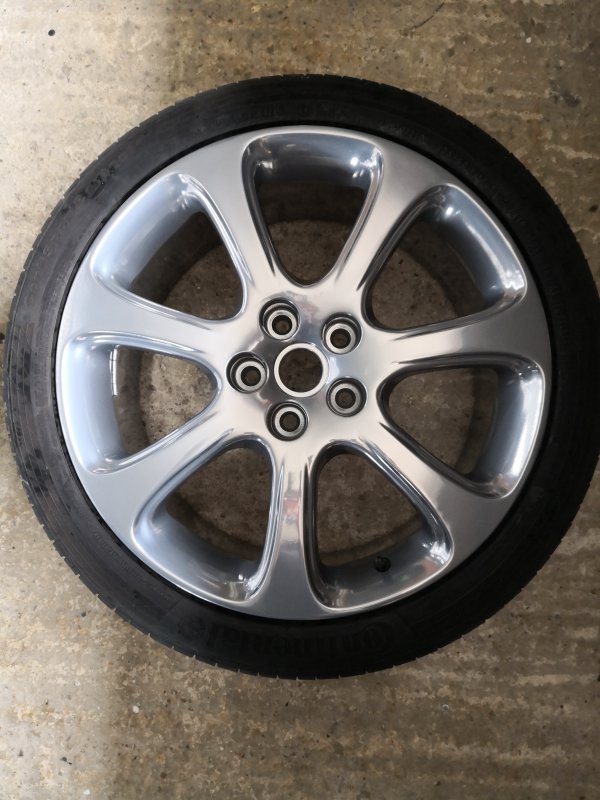 Still heard nothing back from viewer No.1 as complete silence now. No replies to my messages which is a little disappointing. Would have been nice to have received at least a reply to say I'm not interested any more or I'm still thinking about it.

Just had a forum member No.2 pop down to see the 4200 this morning. Lovely guy and had a good little chat. Very nice Ghibli too He will have a think and let me know tomorrow once he has made some enquiries.

I suppose at least the first guy turned up at all. A lot of time wasters out there but I know what you mean. A little courtesy goes a long way.

Still nothing from viewer No.1. Viewer No.2 has decided he likes the car but he want's to go for a more expensive car further up the food chain which is all good and understood. Been doing some digging to fill in an dbolster the documentation/history on paper. Amazing what you can find out with some detective work.

I know the clutch has been replaced and other stuff which is all good. Few more bits to try to fill in but looking good so far. Looks like a nice polish up tomorrow and take it to Festival Italia on Sunday with some For Sale signs 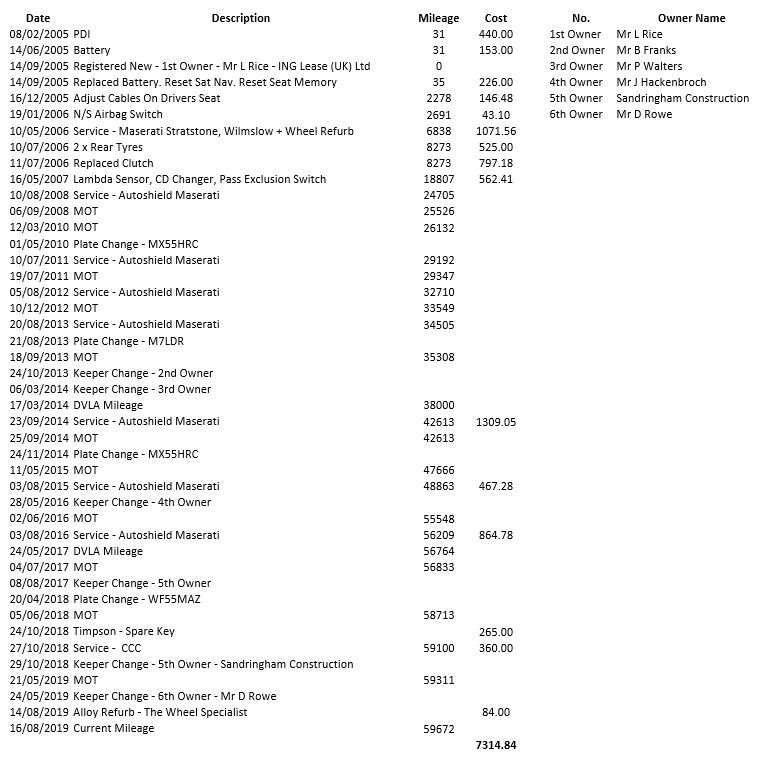 Brilliant history Dean!! I cannot believe how inexpensive this car has been to run over the past 13years...
What would you recon a conservative cost of ownership be over a 3 year period w/o cutting corners nor going all in at a Maserati main dealer either?

All stamped up in the service book but I don;t have copies of the corresponding receipt from Autoshield. Just trying to see if Marios has copies he could kindly furnish me with. Would likely add another £2.5k-£3k I expect to take it up to £10k.

My experiences with the 4200 haven't been ruinous at all. Possibly more to do with not driving them so much also they are garaged and kept well. Also never driven in the rain so keeps them nice.

A decent enough 4200 can easily be run for £3k for 3 years unless you have a big ticket item like a clutch or something. At my mileage and use clutches last ages! My 2007 4200 is on the original clutch at 12 years old and has tons of life left with no signs of issues. It has only just ticked over 15k miles though!

I don't mind if it doesn't sell really as will drive and enjoy it. Lose win

Think if my car needed a new gear box @£18k; I’d just break the rest of it, seems awfully expensive....

No car should need this type of expense, except a Bugatti or simething real ultra high end. Cars, after all, are mainly mechanical machines and perform the same task, albeit achieve it in different ways.

18k on a box is fine if under warranty but that is a lot of cash to splash out of one’s pocket.

Paid for by previous owner at just 10k miles but a warranty claim via Maserati... also had a new dashboard and 3x Clutches by MDs.

When I had it for 30k miles nothing went wrong at all!

safrane said:
Paid for by previous owner at just 10k miles but a warranty claim via Maserati... also had a new dashboard and 3x Clutches by MDs.

When I had it for 30k miles nothing went wrong at all!
Click to expand...