Mid-life crisis car. I gave my wife a choice of Motorbike, Mustache, Mistress or Maserati - I think she chose wisely.

Bought from Kevin Martin Cars in Scunthorpe - arrived at dealer with a return train ticket, but drove away with a QP.

There were a few small problems, but they are getting sorted out. Wish I had spent an hour testing every switch and wiggling every bit of trim, really. It was listed with heated seats, but actually didn't have them, so the dealer paid for aftermarket ones, without quibbling, which was good.

Took it to Dick Lovett in Swindon for a PPI (POST-Purchase Inspection - what was I thinking?!?) but they gave it a pretty clean review. Phew!

One thing a day goes wrong, and fuel consumption the same as a Hurricane.

Forums have already been invaluable:
- Fixed the boot lid re-grab problem with a sticky pad on the spring.
- Fixed the 'boot wont open because the computer thinks it is already open' problem by making DL re-set the computer, rather than replacing the latch & motor which they suggested.
- Sat Nav improved when I switched the mapping from Belgium to the UK.
- Now understand wiper randomness, strange copper door hinges etc.
- And I always travel with a starving urchin with thin enough hands to open bonnet catch
etc

Now working on getting fixes for parking sensors, siren battery and trim niggles at Migliore next week.

Sounds like a good one , random electrical problems can be down to a low battery

Hi there. looks like you came to my part of the country.
No experience of Kevin Martin but it's only 10 miles from me and noticed they had the QP for sale.
Normally they seem to stick to Porsche, BMW, Mercedes & Range Rover.
Just to say I had a Giulietta QV that had random wipers, a window that kept opening a few inches and various sensor warnings. All that was cured by a new battery under warranty.

Welcome Mark...love the QP....One of Maseratis best. Post some pictures of yours if you get a chance. 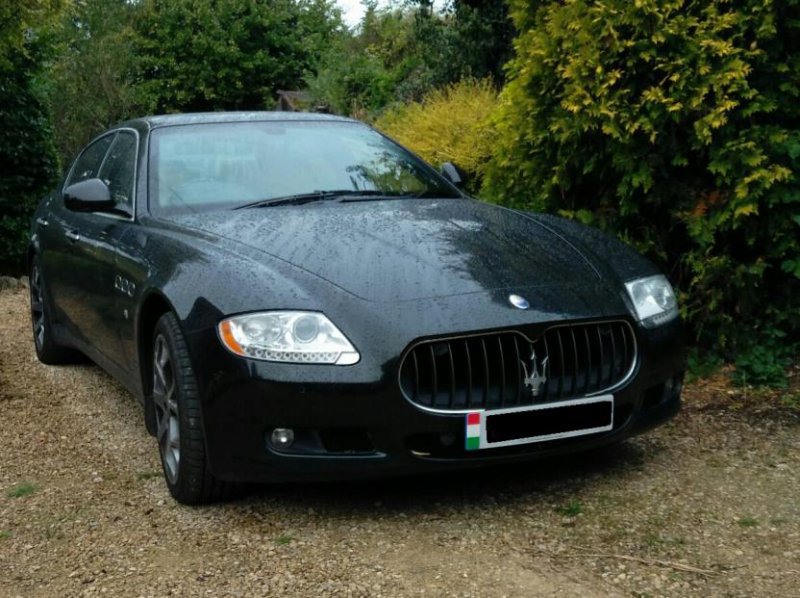 I was planning to paint the fog lights yellow.... What do we think?

MarkMas said:
I was planning to paint the fog lights yellow.... What do we think?
Click to expand...

Your car, but personally I think 'no'

Black always looks good on the QP....very lovely...bet you are pleased.

I like the little Italian flag on the number plate.
As for the yellow lights, definitely not

Another one for definitely not yellow fog.

MarkMas said:
I was planning to paint the fog lights yellow.... What do we think?
Click to expand...

Lovely car there. Understated but moody looking. Like the wheels as well.
Your car as already said but I think it would "cheapen" it painting the lights.

Humm, will have to think about the lights carefully, might try it with some stick on film first.

MarkMas said:
Humm, will have to think about the lights carefully, might try it with some stick on film first.
Click to expand...

Why do you want to tint the lights at all?

If it's for 'style', then as you say, eat some Quality Street, stick the wrappers on and see what you think. Personally I think it will look carp, but then it's not my car and you are free to do as you please!

If it's for 'better vision in fog', then it's a waste of time. Even the French who for years insisted on yellow lights to reduce glare have admitted defeat and realised that white lights are the way to go.

drewf said:
Why do you want to tint the lights at all?
Click to expand...

Just for showing off. I saw one with yellow lights and it didn't look carp at all. But you are right, I should test it first.

Most people try and move away from Yellow/Orange tints on these cars so best to leave well alone.

The only car I have put Yellow Fogs on is my 205 GTI/CTI and on that it really does work well.

MarkMas said:
Just for showing off. I saw one with yellow lights and it didn't look carp at all. But you are right, I should test it first.
Click to expand...

Were they fishing for complements?

You can get some double sided stickleback tape I think

dave richardson said:
You can get some double sided stickleback tape I think
Click to expand...

I had an eeling this would descend into a pun chain.