The Wee Woman's car was hit in a car park by a chap in a Range Rover while we were wandering around Rutland Water. Thankfully all was recorded by witnesses and fault acknowledged.
Third party's insurer (LV) has offered to cover the repairs (third party takeover) and as we are honest upright citizens with no whiplash and no wish to involve m'learned friends, we need to find a suitable bodyshop to repair the Spyder which is a keeper (2003, 36k and tidy..) The car has an agreed value so we are steeled against the "beyond economic repair" scenario

Can you recommend any places not too far from the Devizes/Marlborough area? 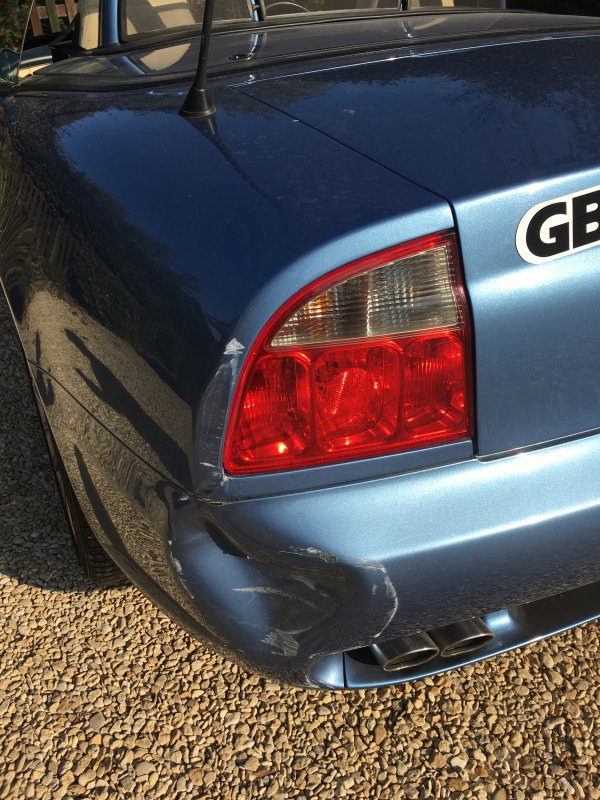 Send it to Dick Lovett at Swindon... they will match the paint better than any other.

Main dealer Ok for old ones? I did get a spare F1 pump relay from their Hungerford branch - as a BMW part which amused their parts lad.

RodTungsten said:
Main dealer Ok for old ones? I did get a spare F1 pump relay from their Hungerford branch - as a BMW part which amused their parts lad.
Click to expand...

Indeed... and they have all the equipment

LV - Apollo would take it to Portsmouth but D Lovett is almost on the doorstep - to be inspected on Thu by them.

Hmmmm - Lovett/Spraymaster having difficulty locating a rear bumper for this 2003 4200. Their Ferrari desk/no; Eurospares/no. Any ideas? They say their oven might pop the bump out but I'm not keen on this.

Either that or a second hand one.

Indeed. A quick search shows 4 for sale in the U.K. Try Greg at https://www.premierperformancecarparts.co.uk/

Zep said:
Indeed. A quick search shows 4 for sale in the U.K. Try Greg at https://www.premierperformancecarparts.co.uk/
Click to expand...

Ta, I did say to SM that a good S/H part would be acceptable. I will pass on this info.

For my 944 I use a Porsche specialist in Devizes called Steve Bull Specialist Cars. Give them a call and I'm sure they'll be able to put you in touch with a good local body shop.