GB Sticker on a Gran Cabrio

In theory I'm off on holiday in a couple of weeks. As I'll be travelling through several European countries, and police and border staff might be a little sensitive at the moment, I figure I should get some kind of GB sticker. I've got 4Dot plates, so there's no room for the panel on the left, but this does mean there's a load of space to the left. I'm thinking that I use a removable tape to stick my small magnetic GB on. The question is, which tape? I want to be able to remove it, and there be no trace it was ever there. Quite happy to use solvents / clay bar / whatever to do the removal. Inside the back window isn't a good option as it won't be visible with the roof down.
T

Try 3M's Heavy Duty Mounting Tape. Its double sided foam tape and waterproof. Can be removed and with a bit of elbow grease and a solvent e.g., white spirit can be removed successfully.
N

I did a tour through France, Belgium, Germany and Holland last summer. I didn't have a GB sticker on the car, and neither did most other UK cars I saw. If I were you I'd just take a couple of stickers and have them in the glovebox, so that if you were challenged on it you can put it on. We also had a small random collection of bulbs (not sure they were all even suitable for the car), a few alcohol testers (approx £1.99 each) and a couple of hi-viz vests.

I also took a small bag of tools (which proved useful as I had to remove a door panel and replace a window regulator), and some duct tape because it seemed like a useful thing to have in case I needed to temporarily fix anything or abduct anyone....not required as it happened.

If you really want the badge on, I'd say to go with a double sided foam tape. If you buy the cheapy stuff off eBay it'll hold it on well enough, but isn't as good as 3M so will probably be easier to remove.

I've been in BE/LU/FR/DE and back and have no GB sticker, never got stopped. I'd argue that a GB sticker is inappropriate as my car has NI plates on it and NI isn't part of GB.
B

If you don't want to get stopped and treated like sh**, may I suggest one of these? 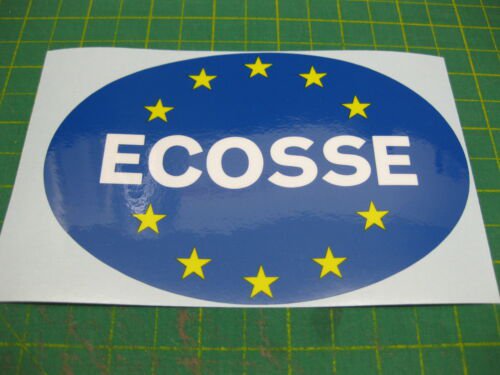 outrun said:
If you don't want to get stopped and treated like sh**, may I suggest one of these?

The joke thread is thataway ->

About 40 years ago, someone did some research on what was the best flag to have on your backpack to get picked up while hitch-hiking in Europe. (Measured by average time to get a ride.)

The preferences were quite localised, with (for example) the Union Flag best in Norway, but the Dutch flag best in Sweden etc. But the best European flag on average across Europe was the Union Flag. Maybe not so much now.

Also, the Canadian flag did MUCH better than USA (back then). Probably even better now.

As for original question. Wax polish the boot lid and use a self adhesive sticker. When it comes to taking it off hairdryer or hot water to soften the adhesive and remove.