I didn't vote as didn't agree with leave or remain. I was leaning towards leave but didn't agree 100% with the terms. That was even without much detail or clarification!

What difference would it have made if I did vote leave?!

The only difference it would have made is if the people that didn't vote decided to vote remain.

GeoffCapes said:
Wattie. Get off your high horse.
My point was the 20m who didn't vote are probably kicking themselves as they could have had an impact on this, be it a large majority for leave or a vote to remain. But they didn't vote. As a democracy your right is to vote or not.
Click to expand...

GeoffCapes said:
Wattie. Get off your high horse.
My point was the 20m who didn't vote are probably kicking themselves as they could have had an impact on this, be it a large majority for leave or a vote to remain. But they didn't vote. As a democracy your right is to vote or not.
Click to expand...

Geoff leavers had the high horse ,
but what has happened is the equivalent of having Vaseline smeared over RedRums eyeballs whilst the public looks on.
We had a horse that won , but the stewards took it away from us.
Eurozone came second and that hurts....especially as our trainers wanted them to win.
No offence intended my maserati friend, just different passions in this instance.

Contigo said:
This is an Embarrassment. Where is our just get on an do it , Best of British attitude? As Dave says the sun will still come up and trade deals will be negotiated.
Click to expand...

Because they won't have a nice retirement job in the EU if we leave , what a shambles , the government really has no faith in Britain at all.

We won't leave which was the intention all along, 30 seconds after the result of the referendum

But I agree with the picture of thatcher and the comments , if we don't leave I think there'll be a lot of protests, mobility scooter shops are going to do well

Been confirmed we won’t leave the EU on the 29th.

And radicalised by Islam even back then as someone pointed out on one of my previous posts on this thread.

GeoffCapes said:
Been confirmed we won’t leave the EU on the 29th.
Click to expand...

Someone did say we'll leave the EU when the DFS sale ends. 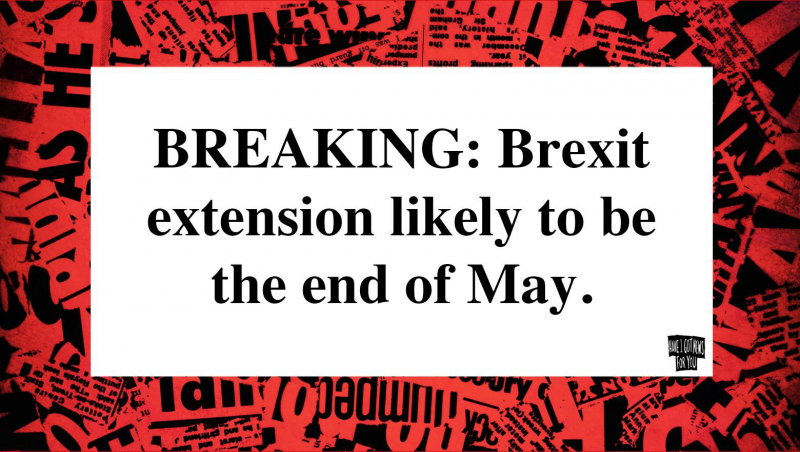 Now that could be interpreted two ways

Unless the EU say no to our extension request of course.

GeoffCapes said:
And the 20 million who didn't vote. Bet they wished they had now!
Click to expand...

Geoff, I didn’t vote purely because at the time I felt that I wasn’t equipped with sufficient information with regard to the positives of leaving versus the potential implications of leaving. I could have voted on my gut feelings, but that would not have been the correct thing to do. Yes, if I had voted I would have had an impact, but possibly the incorrect impact. So rightly or wrongly I did not vote. Two years later in hindsight, given the choice again, with all the facts that have been provided I would definitely vote against my initial gut feeling.

Ironically I didn't vote originally either for similar reasons. However if I had voted it would have been leave. If I had a vote tomorrow based on all I know and have heard over the last two years do you know what my vote would be now.....a stronger leave.

However all kind of pointless as the people running the country seem to do what they want so what is the point in democracy or voting? The poor total voting numbers for a national referendum already mean voting was not as high on some people's priority or whatever other reasons. After this shambles the voting numbers will likely be the same or less. It has done politics no favours whatsoever.

The one person I have to blame the most is Cameron. Make a real mess then p1ss off and leave it for others to attempt to deal with the sh1t storm. Spineless no good waster.

If that is what a good academic education does for you then rule me out. Oh.....I didn't have one!

I’ve just thought of a massive silver lining to all this tomfoolery and delays...

It’s mean we should still be in the EU for the LeMans 24hr, and there’s no need to bother with an International Drivers Permit...

Maybe Theresa May and all the other buffoons are secret petrolheads?… what cars do you think they would drive?

They won’t do that, they never intended to let us leave and won’t do so

GeoffCapes said:
Unless the EU say no to our extension request of course.
Click to expand...

They’re in a funny position.
They don’t want us to leave and have been obstructive from day 1.
Do they take a chance and give us a short term extension in the belief Mays diabolical deal will get through on round 3.........odds?
Disaster for Uk (Heseltine stated today on Sky how bad it was)
Or do they insist on a far longer extension only of 1 or more years perhaps with a financial payment needed in the belief that the Brexit situation will by then have gone away......odds?

Danger is if they go for a longer extension and it’s rejected in the HOP presumably the default is leave under “no deal” on 29th unless Article 50 is revoked which it probably would be.

Or they grant no extension and we leave with no deal which will destroy the house of cards financial position of Europe, and impact the Uk but to a lesser extent......ain’t gonna happen.

I think it’s hilarious that some suggest another people’s vote when the first peoples vote was ignored. It’s very clear now that voting for anything is pointless.
The Uk is now a banana republic of sorts where it appears our economic future is totally reliant on being joined at the hip to the European Ponzi scheme.

Is it just me or has this thread got a little heated? I haven't chimed in for a few dozen pages

It is all a big game; someone is benefiting, many are not. Chaos and uncertainty is not a good thing

Democracy is a very loose term it does not equate to utopia. Thankfully there will be no second referendum, I do not agree with it as it will achieve nothing and frankly the electorate nor the people running the show have proven themselves qualified to make such a decision.

Let's say the referendum result is to stay this equates to a total joke and loss of credibility for the electorate. If the result is to leave then we are cut loose in a shrinking global economy, an equally isolationist USA while China's economy is continuing to slow down. In my opinion the best thing to happen is for Parliament to step up to the mark and call this entire st!t show off so we can all get on with our lives again... Perhaps the EU will in turn improve and evolve after what has been an unknown scenario for all involved

Like the EU or not it has helped improve our quality of life, isolation and harping back to the turn of the 20th century is just backwards. While the reality of leaving the EU will likely just make life 4% - 8% more expensive which all of us on here can likely afford, many cannot... The potential stagnation in growth will cripple the careers of people like me and those who are younger not the established generations above and those who can support their children well into adulthood

Confirmed: Brexit Secretary Steve Barclay voted AGAINST the PM's motion he had just spoken from the Despatch Box in favour of to close the debate!!
It will be, in theory, his job to go to Brussels and negotiate for the extension he has just voted against.